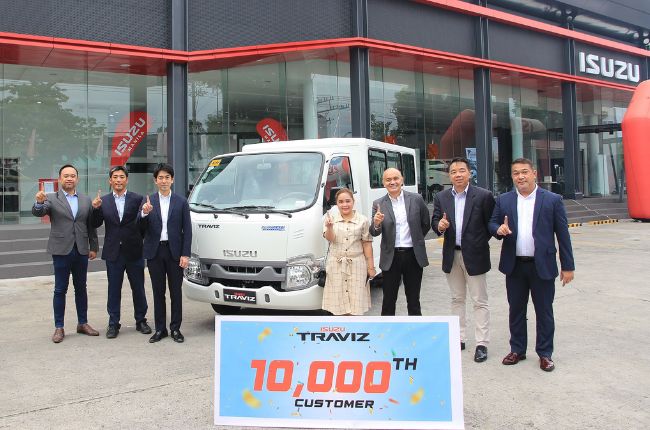 Earlier this month, Isuzu Philippines Corporation (IPC) shared that it has sold 10,000 Traviz units—a remarkable feat given that the all-new model was launched less than three years ago.

Since its local debut in November 2019, the Isuzu Traviz has become a stalwart in the local light-duty commercial vehicle (LCV) segment. The Traviz quickly gained favor among small, medium, and large businesses alike as a viable solution for last-mile deliveries.

Isuzu says the Traviz ate a third of the local cab and chassis market in May 2022. That means the model continues to be a go-to option for buyers looking for a capable and reliable light truck. More than that, the Traviz has been praised for its modern cabin design, generous cargo capacity, and class-leading fuel efficiency.

Who purchased the 10,000th Traviz, you might ask? It’s Microserver-8 Enterprises, rising office equipment, and computer accessory supplier with a presence north and south of the country. It seems this isn’t the company’s first Traviz, either, as the vehicle has been a valued tool in its commercial operations.

Our business operates both in NCR and Mindanao region and the Traviz has been our choice of truck due its big cargo capacity, easy serviceability and nationwide parts availability. In our line of business, our vehicle uptime is very important, and with the Traviz we can be assured of its reliability on the road and durability that the truck will last a long time.
Sherrie Mae Pag-Ong
Purchasing Head, Microserver-8 Enterprises

Newly-minted IPC President Noboru Murakami also led an awarding ceremony for Microserver-8 Enterprises at Isuzu Manila. The truck brand awarded the company P10,000 in cash and P10,000 worth of parts and services.

Now that we are facing an all-time high in fuel prices, the Traviz provides a viable solution... can run more than 1,000 kilometers in just one full tank based on our recent fuel economy drive. It also can carry more cargo with its 1,660-kilogram payload capacity that would lessen your trips in operation.
Noboru Murakami
President, Isuzu Philippines Corporation